An Average Game for the Ages: The Chicago White Sox, the Detroit Tigers, and the Night I Took My Father to a Baseball Game

Baseball is romanticized as a pastoral game spanning generations, handed down in a manner rivaling any convention in our nation's fabric. With that, comes the clear development of the father and son relationship with baseball. While surely I would be mistaken to disregard my mother's love for baseball as well, this instance revolves around Father's Day 2014. On a night when a Cy Young Award winner would do something he had never done, the most unforgettable part of June 12 would center around my time with a sixty-one year old man with whom I share a name.

Monday night, I called my father, Johnnie, hoping he would have at least one night free that week. Having recently sold the delivery route that he operated, the concern was more in the realm of a spontaneous fishing trip or quick getaway with my stepmother. Fortunately, his schedule was clear, which led to a moment I'll not soon forget. As he confirmed his availability, I bluntly replied with, "good, because I'm taking you to see the Tigers." His reaction was much like I assume mine was decades ago. I could hear the excitement in his voice, and immediately there was this feeling of a role-reversal. For the first time, I was taking him to a ballgame. Not just any game, as it was quite serendipitous his favorite team was in town the week before Father's Day.

Johnnie Grace is a good man. Many guys will say their father are good man, and that may be true, but I assure you that he fits the description well. There are several things I admire about the man, characteristics to which I strive to carry some day. Not to say he is perfect, as all men have their vices, but I'll never refuse a notion that I bear none myself. Johnnie is a hard working man, who has countless times put the welfare of those he loves before his own health. The least I could do is give him one night under the sodium light of a Major League ballpark. So we traveled to U.S. Cellular Field on a cool, early summer night to do just that. 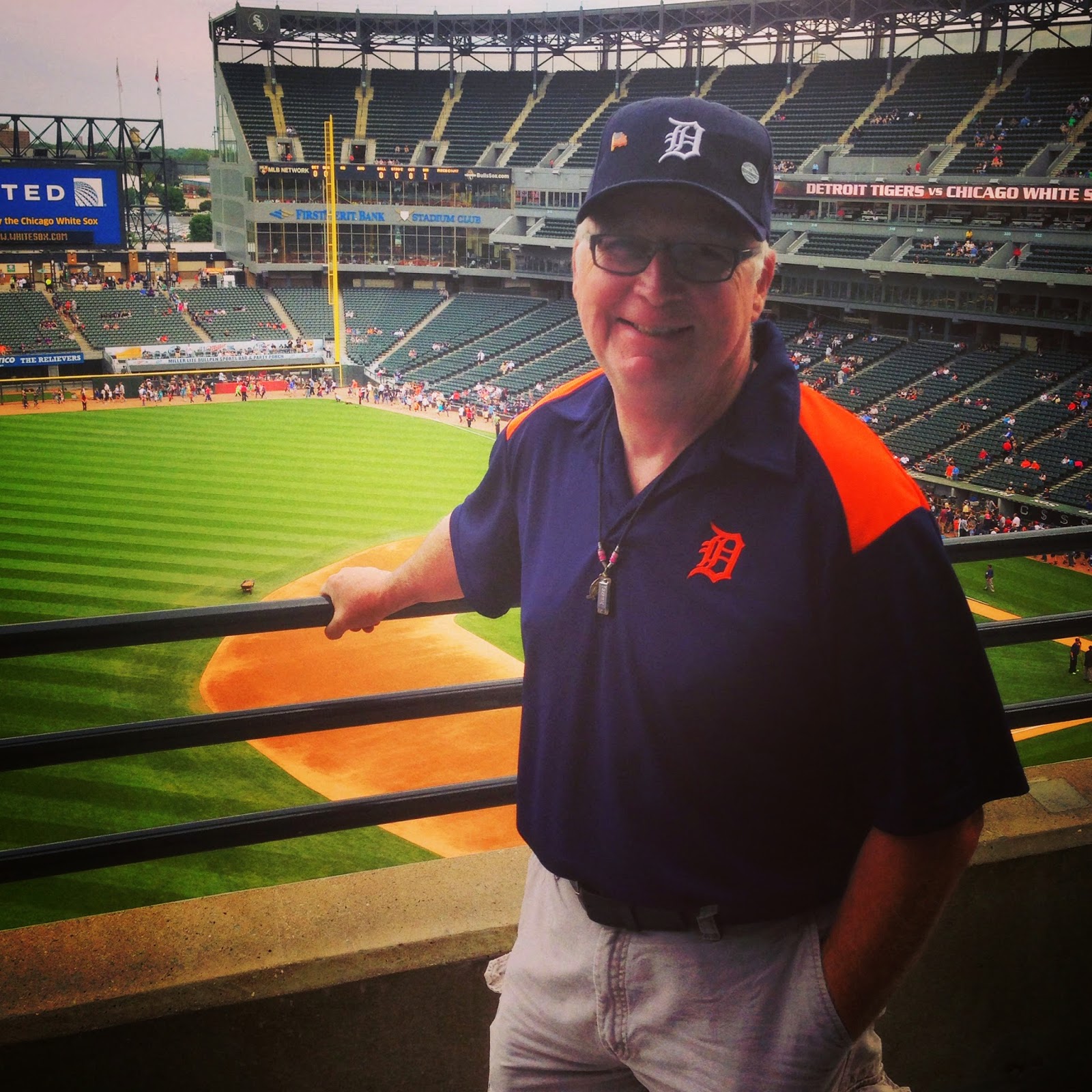 So there he was, the man I had known all my life, dressed in navy blue and orange. A familiar old English 'D' emblazoned on his shirt and cap. A Detroit Tigers fan since long before I was on this Earth. We entered the park and began our climb to the upper deck, where our seats awaited. Given the typical attendance at White Sox games, I purchased seats behind the left field foul pole with the intention of sitting in vacant seats up above home plate. He, of course, wanted to check out the seats I had purchased first, but not before ducking out to the railing at the first available gate. I could tell it was, for him, that same feeling I get when I walk out and gaze into the grand structure of a ballpark. That feeling of being a kid and seeing something far more colossal and gorgeous than the ball fields back home. He had been there before, no doubt, but I think in that moment he was feeling the same thing that runs through me at every ballgame.

In that moment, he was approached by a park attendant. She informed us that since they were short-staffed, we were free to move downstairs and sit in the outfield area between the foul poles. Given our nosebleed origins, this offer was taken and we made our way down the exit ramps to the 100 level. There, we found many more people, team attire spread about even between home and visitor. As we maneuvered through dense packs of people, we reached an open area just as the Star Spangled Banner began. My father is a patriotic man. He will be the first to correct someone if they disrespect the anthem by doing anything other than a silent act of meditation. In an instant, everyone paused and the busy crowd fell silent. When the anthem was over, he mentioned to me how he liked that everyone halted in that moment. We completed our journey to the left field seats, with my father insisting we sit toward the back.

The game began, and like any game between two ace pitchers, it was a defensive battle. While I understand this is a baseball blog, for me the night was less about the actual game and more of what the sport meant to the bond between Johnnie and myself. We talked about life, things happening in each others lives, and so on like a few old friends catching up. There were fits of silence, as can be sometimes, but in those moments I just soaked it how awesome it was to be there with him. Then, of course, we talked about baseball. The many games we each had attended, together and otherwise, as well as this season to date. For maybe the twentieth time in my life, he told me about being at the Metrodome on the night the roof collapsed. It's a story I know front to back, but I'll never turn down his vivid account of that night. As I listened to him tell a number of old ballgame tales, I noticed my own affection for the game within the way he talked about baseball. It was always more of a story than just a game. There was a well developed plot line, whether he noticed or not, and always he could describe the moment well enough to imagine in full color.

In the top of the fifth, Victor Martinez cracked a line drive home run off of Chris Sale into the home bullpen at the front of our section. It had happened so fast, that both my dad and I were stunned in the moment. Then he erupted in cheers for his team in the dorky, jubilant manner that I clearly inherited. The only difference is that his team actually scores runs. Again the scoreboard repeated the expected zero after zero each inning. Max Scherzer was rolling for Detroit. He would only give up three hits over a complete game, with eight strikeouts for good measure. The White Sox threatened to score in the fourth inning, but they would not see third base for the rest of the night. The Tigers added two more runs in the top of the eighth when Miguel Cabrera singled in Bryan Holaday and Eugenio Suarez. Holaday would add an RBI himself in the ninth to run the tally to 4-0. Many of the Chicago faithful had found their way to the exits, leaving several scattered hordes of Tigers fans cheering on their ace pitcher. Scherzer, for his stellar young career which included an All-Star Game start and a Cy Young last season, had never pitched a complete game. This was his opportunity. He had barely crossed over the 100 pitch threshold after the eighth inning.

With the end of the game drawing nigh, my father and I walked up to the concourse and watched the final outs from an area just downwind of a statue of Sox great Frank Thomas. There was a successful challenge of a trapped fly ball by Robin Ventura, but that only delayed the inevitable. Scherzer caught Dayan Viciedo napping on a 96 miles per hour four-seam fastball to end the game. That familiar grin was painted brightly on Johnnie's face. His team had won. I couldn't have been happier with the result. For the first time, I had treated my dad to a night of baseball, conversation, and a few overpriced ballpark margaritas. The icing on the proverbial cake was that he got to see his team's ace pitcher complete a career milestone.

We wandered out of the park and made our way back to my car, but not without a few high fives shared between he and a few fellow Tigers fans. On the drive back, there was that familiar tone to his voice as we talked about the game we had just witnessed. It was that same sound he had when I told him we were going. It was that role-reversal again. I felt pure happiness just based on his joy of having gone to the game. If that's what it felt like for him to take me to a game all those years ago, then maybe I can fully understand this ageless bond between fathers, sons, and the game of baseball.
By Michael Grace at June 23, 2014

A baseball season can seem so long that a single plate appearance can seem largely insignificant. As summer's long days turn cold and th...