And On Into the Night: Opening Day for the Gary Southshore Railcats

Along the Southernmost reach of grand Lake Michigan, lies a city long in the tooth of industry. Gary, Indiana. A place well framed in a legacy of both pride and plight. Generations have earned their livelihoods in her steel mills. The grit of no-collar profession is embedded in the seams and cracks of a once flourishing Chicago suburb. Gary is of its own prerogative, never bowing to the stagnant woes of an ill reputation. Nestled between fourth and fifth avenues, a ballpark seems politely out of place among the burgeoning ghost town in its company. Yet just inside U.S. Steel Yard, the home of the Gary Southshore Railcats, an oasis is laid out in serenity between two foul poles.

It's a balmy evening in mid-May; one of those days that persuades the skin into believing summer is here and cooler temperatures have gone the way of the dodo. U.S. Steel Yard is overcome with daylight. The aroma of freshly cut grass lingers, welcoming the new season. It is the opening day for the American Association baseball league. The Railcats, aptly named for the city's heritage in the steel industry, have taken the field. Clad in all white uniforms, complete with the old-time look of striped socks and stirrups, the home team is introduced to a crowd of a little over 4,000. The shadows shift, from a creep to a sprint, out toward the right field wall. The visiting Lincoln Saltdogs have already been introduced to a surprisingly warm reception. There is little fan-kindled rivalry in this league. 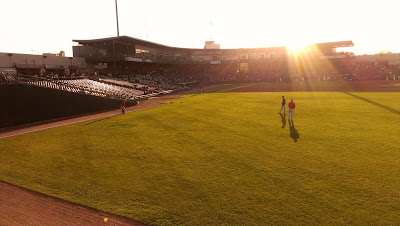 The anthem is sung. The formalities of a baseball game have changed little in the last century.

An eagerness loiters in the air within the confines of the ballpark. Now more than a decade after the team's genesis, the Railcats have become a staple in the Northwest Indiana community. The expectation is there, as it will always be, for the team to win, but the beauty of baseball is in its forgiveness. The truest of fans will forgive a loss just as easily as the team will forgive the casual fan's fair-weather interest. In the team's first eight seasons, all spent in the currently defunct Northern League, the Railcats made the Championship series five years in a row and won two league titles in 2005 and 2007. A franchise with a winning tradition, barely breaking into adolescence. Some fans chime about this year's team, romancing the chances of another pennant, what would be Gary's first in the American Association. 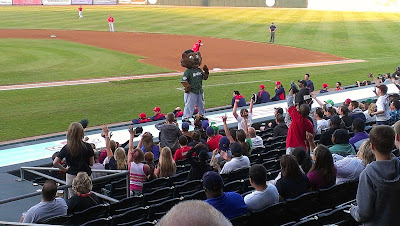 What is most wonderful about minor league and independent league baseball is this fan interaction. The Railcats' two over-sized,  humanized cat mascots, Rusty and Rascal, have caught the attention of every youthful eye in the park. This is merely an introduction. The game gets underway and quickly Lincoln is ahead by four runs. Fan reaction is dismal and Rusty buries his face in his "paws." But despite the early deficit, the warm crowd swells back into support of their team. Quickly they are rewarded. Although Lincoln scores another three runs in the top of the second inning, Gary managed two in the first and is threataning in the bottom half of the second. Mike Massaro rips a line drive into right field. One run scores. Then another. Then another. Its a double for the 'Cats right fielder. Through two brutal, offensive innings, the Saltdogs lead 7-6.

Innings slip by as the night begins to stretch across Northern Indiana. The air is cooled considerably. The cups once filled with pop and beer have been exchanged for anything redeemingly warm. Jackets are donned. Summer has not yet planted foot in the Midwest. The lights over top of the Steel Yard are already lit; prepared for the due darkness. The park, less than an hour from Chicago, has seemingly gone from the daylight charm of Wrigley Field to the twilight glow of New Comiskey.

Wild pitches are prevalent tonight. A few pitchers on each staff have speed to impress, but control to make a pitching coach cringe. Perhaps it is merely opening night jitters. Perhaps it is the side effect of the new season. As the game moves forward, the pitchers settle in. The moon has risen above the stadium walls. Gary tacks on a pair of runs in the fifth inning. At one point down 7-2, the home team has come back to take an 8-7 lead. 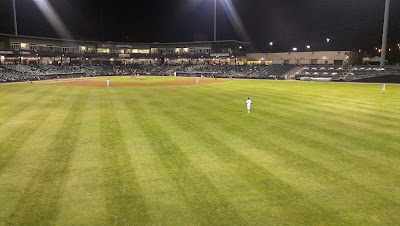 With the 'Cats an inning apart from starting the season with a win, Lincoln ties the game at 8. The overwhelming sentiment of those in attendance is for this game to end in regulation innings. Unfortunately for them, the Railcats fail to score in the ninth. Free baseball is given to those who wish to stay. It is a Thursday night and school is still in session. Many leave. A sparse crowd threatening a few hundred takes in the remainder of the game. Neither team threatens in the tenth.

As the clock on the center field scoreboard indicates, the game has stretched to the four hour mark. Rarely are games this enduring, but perhaps it is appropriate for a town long suffering to the stresses of labor. Gary is a proud city. The question of 'why' may be asked when the condition of the area has seen far better days. The pride is in the ability to withstand; the drive it takes to create something from nothing. Baseball understands this pride. In an instant, a relatively unknown can rise from the malaise of a rough outing to become a hero.

With two outs in the bottom of the eleventh inning, Adam Klein rose to the occasion. Slapping a line drive just out of reach of Saltdogs center fielder Stephen Douglas, the winning run rounded third and scored. What remnants of a large crowd made up for their departed counterparts, as the breadth of U.S. Steel Yard erupted into a dull roar. The game was over. The Railcats had taken the 11-inning marathon by the score of 9-8. As the home team stormed the field to greet their hero just beyond the pitcher's mound, the visitors walked off, heads low. A rough loss is never easy to take. Baseball is kind, however. Each day brings new trials, rewards, mistakes, and consequences. For the handful of Saltdogs faithful in attendance, the grim realities of an ill-fated finish is worn on low shoulders. Tomorrow is a new day for Lincoln, ripe with baseball's greatest gift- forgiveness. 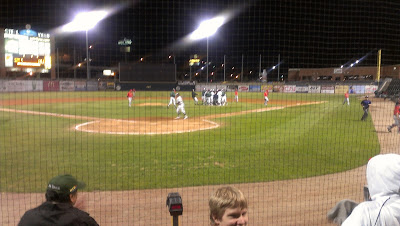 The season underway, Gary begins a long, arduous journey in chase of the league's title. Months will pass from now until the completion of their quest. Fans will come and go. The team will ride the gamut of emotions that baseball surely provides to those who play.

Gary, Indiana has been romanticized and chastised for over a century. It has given jobs to locals and stars to the masses. It has the splendor of a mighty lake shore in equal hand to a fallen infrastructure. Gary has suffered its losses, but has always stood unwavering in the face of outright defeat. Tonight, Gary has a winner.
By Michael Grace at May 17, 2013

A baseball season can seem so long that a single plate appearance can seem largely insignificant. As summer's long days turn cold and th...